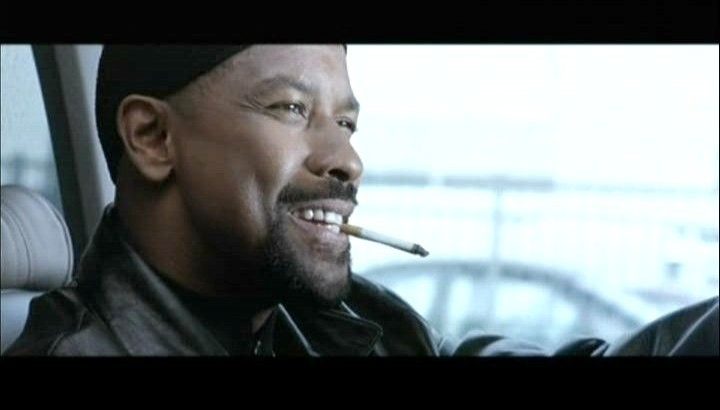 Glory is the story of the 54th Massachusetts Infantry Regiment, the first unit in the American Civil War made up almost entirely of African Americans. Colonel Robert Gould Shaw, played by Matthew Broderick, leads the regiment into battle. Denzel plays a private in the unit, representing the heart and soul of the force as it trains for action. Denzel would go on to win an Oscar for his performance. The above clip is from a wrenching part of the movie where Shaw is forced to punish Pvt Trip for desertion in front of the entire unit.

There are probably only a handful of actors that can even think about portraying someone like Malcolm X on the screen. Denzel does it in one of the defining roles of the early part of his career. It marks the second collaboration between Denzel and Spike Lee (the first being Mo Better Blues) and earns Denzel his first Best Actor Oscar nomination.

One of the most popular and highest rated movies of all time with three Oscars to its credit, many people have seen Philadelphia before. It is definitely worth rewatching, for both Tom Hank’s amazing performance as well as Denzel’s realistic portrayal of popular attitudes towards HIV/AIDS in the late 80s / early 90s. Denzel plays the lawyer Joe Miller and represents another lawyer, Andrew Beckett, in the discrimination lawsuit he files against his former employer. Beckett is wrongfully fired from his firm when they inadvertently learn that he has HIV/AIDS.

Denzel and Julia Roberts in a John Grisham novel adaptation. Sure it didn’t win any Oscars but it was still entertaining! The film is a conspiracy thriller about two Supreme Court Justices assassinated by Stanley “Caesar Flickerman” Tucci.

Another film where Denzel plays a military officer and heavily features another 90’s icon, Meg Ryan.  Supporting actors include Lou Diamond Phillips and Matt Damon! Denzel’s character, Lt. Col. Serling, is charged with investigating whether or not a woman would be awarded a Medal of Honor for battlefield heroics. Carrying the emotional weight of his own tragic battlefield decisions, Denzel tries his best to get to the bottom of what happened. Little known fact: Matt Damon’s performance in this film got him cast in The Rainmaker, as well as catching the eye of Steven Spielberg who would eventually cast him in Saving Private Ryan.

Denzel stars opposite future NBA hall-of-famer Ray Allen in a Spike Lee production that is the rare sports movie that is about more than the game. I remembering watching this film growing up when it was on LaserDisc.

The Siege reunites Denzel with director Ed Zwick (Glory) and has him starring opposite Annette Bening. Also co-stars Tony “Monk” Shalhoub and Bruce Willis. The film centers around terrorist threats made against NYC. Notably, this film was made well-before the 9/11 attacks, and foreshadow debates about martial law, civil liberties, and appropriate responses to terrorism that would come to dominate the 21st century. Of course, the 1993 WTC bombing and other terrorist incidents played a role in inspiring the film.

Denzel was nominated for the Best Actor Oscar for his portrayal of Ruben “Hurricane” Carter, ultimately losing out to Kevin Spacey (American Beauty). Interestingly, when Denzel ultimately wins a Best Actor award in 2001 for Training Day, he beats out another boxing film nominee, Will Smith (Ali) in what has probably been Smith’s best prestige performance.  Another fun fact: Denzel’s co-star Liev Schreiber will go on to work with him again in 2004’s Manchurian Candidate reboot.

Before there was Friday Night Lights there was Remember the Titans. The film about racial integration at a Virginia high school is based on a true story and is directed by Jerry “I never met an explosion I didn’t like” Bruckheimer. One of Denzel’s highest rated movies, this Disney production is a feel-good pickmeup. Little known fact: the actress who played actor’s Will Patton’s daughter? None other than Hayden “Save the Cheerleader” Panettiere.

Probably my favorite Denzel movie of all time (I say probably because Man on Fire leads on some days). The dark, thrilling, buddy cop film directed by Antoine Fuqua is the vehicle that garners Denzel his first Best Actor Oscar. Ethan Hawke’s portrayal of a rookie cop caught up in a scheme well above his pay grade and his ability to handle is fantastic. The two would later on reunite in the Fuqua-directed reboot, Magnificent Seven.

Denzel plays a former Marine who is charged with protecting the daughter of a wealthy family (played by Dakota Fanning). I can’t say enough about Denzel’s anguished portrayal of someone who is supposed to be a “hero” in this film. While the film was critically panned, many of Denzel’s biggest fans love this film because it shows his ability to play someone completely free of restrictions. Yes, it is a violent film, but the violence serves a purpose: to show how much Denzel’s character cares about bringing back “Pita”.

Reunites Denzel with Jonathan Demme (Philadelphia) and puts Denzel on the screen with Jon Voight and Meryl Streep. Jeffrey “Beetee” Wright has a plot-moving role as a soldier in Liev Schreiber’s unit.

Inside Man is a thriller starring Denzel as a hostage negotiator, Jodie Foster and Clive Owen (most-of-the-time-villain Willem Dafoe and Chiewetal Ejiafor had minor roles). Directed by Spike Lee, Denzel’s intelligent performance carried the film. Lee tried to get a sequel made but failed to secure adequate funding for the film, even though many of the previous cast signed on for it.

Who is Frank Lucas? Frank Lucas is above the mafia, claims Russell Crowe’s character in American Gangster. Most people don’t realize that this is the second time Crowe and Washington appeared opposite each other: Russell and Denzel previously co-starred in the widely-panned 1995 sci-fi flick Virtuosity. Many people consider American Gangster their favorite Denzel flick– it certainly deserves to be in the conversation. This is what happens when you put Crowe and Washington’s acting prowess together with legendary director Ridley Scott’s (Aliens, Blade Runner, Gladiator) abilities

The critics didn’t really like this remake but you have to give John Travolta credit– he was pretty creepy in the film. Denzel is at his human-best, he doesn’t have any ninja training or superpowers in this film. Also co-stars John “my feet itch” Turturro and James Gandolfini (RIP).

Denzel gets in on the post-apocalypse-film action with his portrayal of a nomad starring opposite Mila Kunis.

Denzel was Sully before Tom Hanks was Sully. Flight earns Denzel another Best Actor Oscar nod and is directed by Robert Zemeckis (Back to the Future). Interestingly, Zemeckis directed Hanks in 1994’s Forrest Gump, for which Hanks would earn a Best Actor award. Clint Eastwood would go on to direct Hanks in 2015’s Sully.

Denzel tries to protect Chloe Grace Moretz in this Antoine Fuqua directed action thriller. A fun movie that will get a sequel sometime next year!

While the ensemble cast is pretty great (Chris Pratt, Ethan Hawke), Denzel riding a horse is even better. Antoine Fuqua directed this remake (it was apparently a passion project of his). Worth a watch!
So those are our favorite Denzel films. Which are yours? Comment below! We’d love to hear from you.