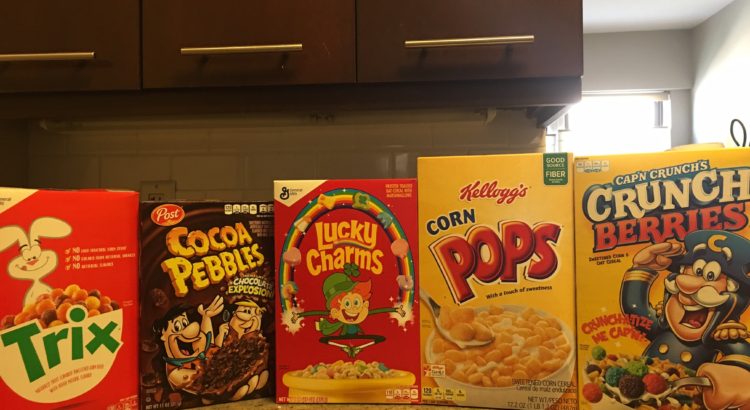 Once a year I get an intense craving for cereal and we’re not talking about the healthy kind. When I crave cereal it’s for the really brightly colored, artificially flavored, super sweet kind. Well the craving came around again this year and instead of getting one box, I decided to take a walk down memory lane and buy 5 of my favorite childhood cereals. Let’s see if they’re still as good as I remember.

5. Cap’n Crunch’s Crunch Berries
The little yellow pillows of goodness. I remember I had plenty of this as a kid but not sure why I picked this instead of the original Cap’n Crunch. Cap’n Crunch’s Crunch Berries definitely didn’t live up to what I remembered as a kid though. This was probably the sweetest of the bunch and it also tasted the most artificial. The berries didn’t taste like berries but more like little sugar bombs that upon explosion added an unwanted level of sweetness to an already sweet cereal.

Yes it still cuts the roof of your mouth like it always did and it also leaves a disgusting film over the milk. I should’ve left this where it belonged, in my memory.

4. Corn Pops
One thing I noticed was how pricey a box of cereal is nowadays. A normal sized box can easily set you back five dollars. Corn Pops was the priciest on this list (wasn’t on sale) and it was also the least sweet.

This is one cereal that I can eat nonstop. The beautifully golden puffs are so airy that it doesn’t feel like you’re eating much and before you know it you’ve already downed two bowls. When I was eating the Corn Pops it reminded me of Smacks, the one with the frog character on the box. I remember Smacks being similar in that they were also little puffs of airy cereal but with a nice caramel flavor. I might have to pick up a box to refresh my memory but in the meantime Corn Pops definitely hit the spot.

3. Trix
I’m pretty sure the checkout girl at the supermarket was judging me when she saw the 5 boxes of kids cereal, with the biggest offense being this box of Trix. What was the slogan again? Oh right, Trix are for kids. 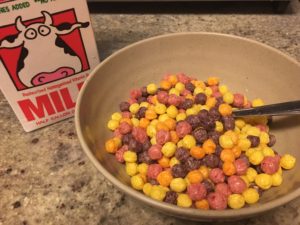 Trix was a special treat back in the day. The parents didn’t usually allow rainbow colored cereal in the shopping cart but once in awhile a box of Trix would make its way home. This wasn’t your old school Trix though. The colors were much more subdued with just yellow, orange, red, and purple balls. Gone are the green and blue variety. It looks as though they are trying to emphasize the “healthy” changes to the cereal with three big checkmarks touting that they no longer use high fructose corn syrup, no colors from artificial sources, and no artificial flavors. I definitely taste the difference and since it isn’t as sweet as the old Trix, it is a lot easier to finish a few bowls in a row.

2. Lucky Charms
Remember when for a limited time they had special hot air balloon marshmallows? Of the five boxes that I purchased, this is the one that is closest to being empty. Everyone knows that the best part are the freeze dried marshmallows but the balance is perfection. There are just enough marshmallows that you don’t feel jipped by General Mills and the frosted toasted oat cereal is just sweet enough that you find yourself unable to stop. Another dangerous thing about Lucky Charms is that they are so easy to snack on. The other cereals on this list demand milk be part of the equation but you can easily just pour a bunch in a bowl and nibble away.

1. Cocoa Pebbles
I used to watch a lot of Flintstones as a kid and the fact that Fred and Barney were on the box probably sold me on Cocoa Pebbles. These little chocolatey rice puffs are the perfect cereal. The small pieces provide great texture when taking in a big spoonful, the chocolate flavor is amazingly rich, and of course who doesn’t like how your regular whole milk magically transforms into delicious chocolate milk. Perfect.

One thing I noticed on this cereal binge was that a lot of these cereals like to use red or yellow for their box color. Perhaps it’s to stand out but doesn’t it defeat the purpose when the competitors are all using the same colors? I’m also glad that this wasn’t a flavor when I was a kid. 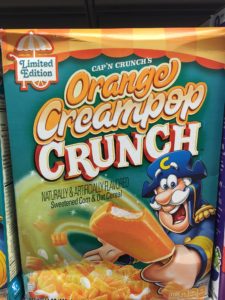 What are some of your favorite childhood cereals?